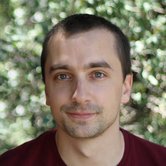 Martin Renou is a Scientific Software Developer at QuantStack. Prior to joining QuantStack, Martin also worked as a Software developer at Enthought. He studied at the French Aerospace Engineering School ISAE-Supaero, with major in autonomous systems and programming.

As an open source developer, Martin has worked on a variety of projects, such as SciviJS (a JavaScript 3-D mesh visualization library)

Passionate about 3-D rendering, Martin has also developed an open source 3-D Chess GUI based on OpenGL during his spare time.

Martin is the main author of xleaflet and xeus-python, he worked on xtensor and xsimd, and is now working on Jupyter interactive widgets.